In the last few blogs I was talking about some basic facts of microbiology avoiding the hifi research. Though am still left with some basic blog-posts, this time let me post on one of the hot topics in microbiology, a debate which started from August 2011. For the convenience of understanding to the audience, let me divide the entire post into 3 sections. First a few words on general characters of influenza, 2nd what was the controversy and last on what was the main lessons when the paper was out to public.


Every person who knows Medical virology has given a very large chunk of credit to 3 virus- HIV, Hepatitis B and influenza. I don’t mean to make a statement that the rest are not focused on, but the others are definitely less studied compared to the trio mentioned.

Influenza virus in a nutshell: 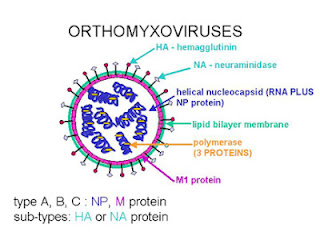 Influenza virus belongs to the family Orthomyxoviridae, within the negative-sense RNA virus order Mononegavirales. The virus is enveloped with segmented RNA (8 RNA segments to be precise). The viral RNA is closely associated with the nucleoprotein (NP) to form the Ribonuclear protein (RNP). The NP is a type-specific antigen. It occurs in one of three antigenic forms into 3 types A, B and C (Basis for the classification of influenza viruses). And yes, the most important point, unlike many other RNA virus, this replicates in nucleus. The replication uses a RNA-dependent RNA polymerase complex, consisting of three proteins, referred as polymerase basic protein 1 (PB1), polymerase basic protein 2 (PB2) and polymerase acid (PA) protein.

Table 1: Pandemics caused by Influenza A (For source, click here)

Of all the proteins that is isolated and studied- Hemagglutinin (HA) and Neuraminidase (N) has captured the interest because of its involvement in the binding kinetics.

The HA is a trimer with identical subunits made up of 2 polypeptides. Each monomer is designated with a a receptor-binding site at its membrane-distal tip, which means the sequence at this region has a lot to speak for itself. Sialic acid is bound similarly in all HAs examined by hydrophobic interactions and by hydrogen bonds with the 130- and 220-loops and conserved amino acids in the base of the site. It is being proposed that avian and equine viruses has affinity to sialic acid in α2,3-linkage to galactose while the human viruses prefer α2,6-linked sialic acid, and swine viruses appear to bind sialic acid in both linkages.

Fig 3: Crystal structures and phylogenetic organization of pandemic HAs (Gamblin and John, link)

Neuraminidase is a tetramer of identical subunits. Each of the subunits that form the head is made up of a six-bladed propeller-like structure, the blades of which are formed by four antiparallel strands of β-structure. At the stage of invasion the NA is known to be involved with removal of decoy receptors on mucins, cilia, and cellular glycocalix, strong binding to each of which would impede virus access to functional receptors on surface membrane of target cells.NA plays an essential role in release and spread of progeny virions, following the intracellular viral replication cycle.

For more molecular details about HA and NA, the readers are strongly advised to the work by  Steven J. Gamblin and  John J. Skehel. (Link).

The following video will also be of great help, to get your understanding right.

So what was the debate all about?:

The debate was about to publish or not to publish the study by Japanese–US team headed by Yoshihiro Kawaoka at the University of Wisconsin-Madison who had genetically created a few mutants of influenza from a non human strain (In this case avian type) and looked into possibility of its transmission to humans with ferrets as models. For, a detailed description of use of ferrets as animal models for influenza go here. 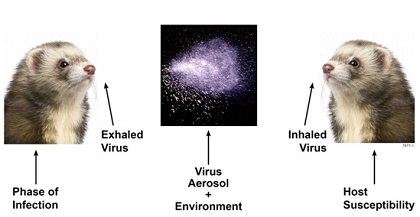 The first positive side of the debate was by the people who had did the work and other scientists who believed that work doesn't possess and public threat or doesn't infringe the national security. The work only provides the basis for information on the probabilities that the virus can be a possibility of pandemic if overlooked. 2 quote form Yoshihiro Kawaoka, "Our study shows that relatively few amino acid mutations are sufficient for a virus with an avian H5 hemagglutinin to acquire the ability to transmit in mammals" and "H5N1 viruses remain a significant threat for humans as a potential pandemic flu strain. We have found that relatively few mutations enable this virus to transmit in mammals. These same mutations have the potential to occur in nature". The group were assessing the possibility and at least according to me thats justified in a scientific community.

The opposing group was mainly the National Science Advisory Board for Biosecurity (NSABB), which raised concerns over the possibility of use of the artificial mutations and direct it as a biological weapon (to read about biological warfare refer to my previous post). Statements such as "Probably one of the most dangerous viruses you can make" by virologist Ron Fouchier of Erasmus Medical Center and "I can't think of another pathogenic organism that is as scary as this one, I don't think anthrax is scary at all compared to this" by Keim as reported in Science Insider article gave more thrust. Justification was option of bioterrorism. But many people with high scientific status did argue that the experiment is done and the story has created so much of noise that if someone really wants to make it, then just by looking at the story they can. Instead a public access will give more option to look at the problem.

So what happened when the paper got published?

The paper was published in Nature Journal (Online on 02 May 2012). Nothing really happened, except the fact that the data gave more neat idea and more answers for many questions on influenza biology. Ferrets are not humans and hence the transmissibility in ferrets doesn't necessarily reflect patterns in humans. A visual and a table from this paper had grabbed most of my attention which is shown below. 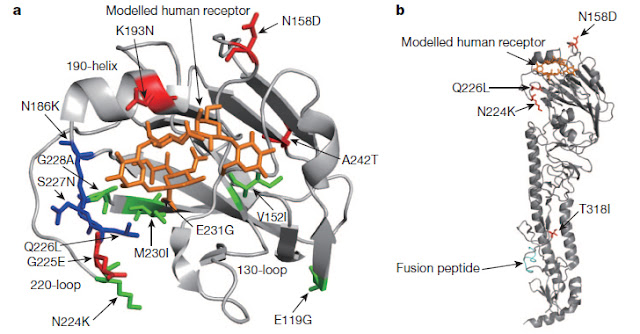 Fig 5: Localization of amino acid changes identified in this study on the three-dimensional structure of the monomer of VN1203 HA

The study created some H5 genetic mutations, in globular head of a of A/Vietnam/1203/2004 (H5N1; VN1203) strain. They also replaced the multi-basic HA cleavage sequence with a non-virulent-type cleavage sequence thus allowing them to work at ease and avoid issues of biosafety. Using a sialylglycopolymers absorbed to plates, they also tested for receptor-binding properties of the selected variants. They were able to demonstrate that the N224K/Q226L combination is critical for the shift from Sia α2,3-Gal to Siaα 2,6-Gal recognition (Reflected in Fig 5).

In the transmission study, four of the six contact ferrets were positive for virus between 3rd and 7th  day after contact, and all contact animals were seropositive; no animals died in the course of the transmission experiments. (Data shown in Table 2).

For a detailed look you must read the paper (since its open access no excuse). You could also listen to a short interview with the author of this work through Nature Podcast- 03 May 2012. However, the main take home message drawn from the study was that a very few mutations in a critical region can create a stage for the virus to possibly cross into the humans. There was no fatality registered with the ferrets and hence its seems legible to comment that the use as a biological warfare agent is out of track. So all the hush bush just delayed some insight.