A special soup of Mn-DP-Pi for better vaccine design

If you are just gazing at first line and guessing what that could mean, its greetings in Korean. My blog is going through a darwinian evolution, i must admit. The structure of my writing has entirely changed. In a good sense  by the way. A new structure has emerged for the posts, where i talk about a couple of most interesting facts that grabbed my attention, and then move on slowly to a paper that i want to talk about. And then a few tit bits, here and there.... Oh! Yes, this is on path of improvement just like microbiology.

Most big journals are busy updating their impact factor. Just open a journal (any), and you will find new impact factor flashing on a side. Oh, yeah. Thats news for journals. And what could be breaking news in science for us? In science, Astrophysics research (Heavy words), reveals the presence of a massive black hole at the center of milky way galaxy (Link). Why do i care, that supposedly a dump-bin of space is minding its own business. If i say this to a physicist he would feel the microbes are minding their own and why we care. (Well i better not venture into their territory).

A hot news in the field of biology with clinical impact and probably the game changer of future is approval of genetic therapy for a lipid disorder. China was the first country to approve a gene therapy product for commercial use, this new approval in europe has triggered a new debate (Link to the story here).  The second pathbreaking science of the week is reverse engineering a species. Kit Parker comments “Morphologically, we’ve built a jellyfish. Functionally, we’ve built a jellyfish. Genetically, this thing is a rat”. Sounds interesting!! (The quote and fig 1 taken from Nature News).

So much for the cover story? No, no!!!! The cover story for me is finding an important function for Motif D that enhances our understanding of viral replication (Link to story here). Another, a unique potential target has been identified in bacteria to develop new antibiotics. The target here is RNase R that has a few unique properties. (Link to story here). If you can bear with me, A quick question for you. What is the most important hurdle in delivering live attenuated vaccines?? Yes you are right. Maintaining a cold chain. That problem looks like has its solution in a moth!! No kidding. Researchers at Tufts University School of Engineering, have found that the problem can be solved by using  a silk protein as stabilizer. If you ask me will this mixture of silk into vaccines effect immune titers, "I don't know". (Link to the story)

Other than all the stories there is one important article that is the centre point of the blog today. Radiation is a very important tool in biology. be it for mutation studies or for creating a strain that is very weak. The attenuated strains can be used for vaccination. To get a high mutation, and thereby sterility a high dose radiation is employed, that often culminates in heavy DNA damage. But there is a bystander effect. The proteins that are supposedly immunogenic may also be tweaked in the process. So how do you solve the problem? The article in cell host and microbe by Gaidamakova etal is about how to evade this.

In addition to the problem posed above there is another problem that authors highlight in the introduction. With decreasing genome-size, the dose of irradiation needed to hit an organism increases, the hurdle posing the most in case of viruses. So, if you could find a protector of proteins, at high radiation assaults, then you have a solution. The authors hit open this hypothesis with recent findings that Deinococcus radiodurans, a bacterium which has an extreme resistance to ionizing radiation. The observation was that the proteins of D radiodurans could sustain proteins but not DNA damage at same high radiation levels. The implied mechanism was  Mn2+ complexes which specifically protect proteins from ROS damage. 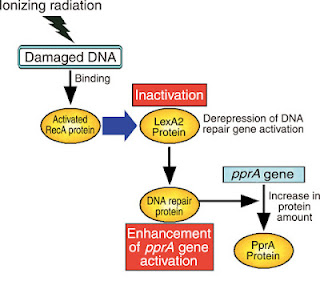 The authors, reconstituted a Mn2+ and a decapeptide (H-Asp-Glu-His-Gly-Thr-Ala-Val-Met-Leu- Lys-OH), in orthophosphate (Pi) buffer (henceforth referred as Mn-DP-Pi). To test the capability, dodecameric enzyme glutamine synthetase which is deactivated at 150 Gy was used. Mn-DP-Pi mixture had retained 50% activity of the enzyme at 50,000 Gy. By the way Gy is a unit of radiation. The question as to if Mn2+ is a non specific ROS inactivator was solved by replacing with Mg2+, Ca2+, Fe2+, Ni2+, Cu2+or Zn2+ ions. But the best contender was mixture of 3 mM DP and 1 mM Mn2+ in 25 mM Pi. I have an interjection here. At this point I didn't really understand, if they have tried using only Mn2+, only decapeptide and then looking for protective efficiency.

They also looked into the ability of the protector, to save bacteriophage gamma. The study looked into bacteriophage lambda survival at various doses. At this point they have shown the effects with nly Mn2+, only decapeptide. That answered my question. (See fig 4). As you can see from their survival plot, indeed the combination effect is high. 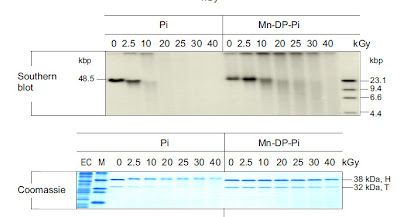 A small digression here. Science has a flow. the first step in science is to take up the observations and make sense out of it by constructing a theory. Once a theory is in place it is tested by various parameters for accuracy and the results matched to observation. At this point, a hypothesis becomes sufficiently a theory. But the main test of theory comes from a prediction that the theory makes. This prediction is then sought and finding it implies affirmation.

Once the players of this paper knew that they had a strong base they moved on to another organism-  Venezuelan equine encephalitis virus (VEEV). The V3526 strain was a attenuated strain that which couldn't make it to vaccines, because it couldn't tolerate radiation. The effect of radiation was loss of important epitopes. With Mn-DP-Pi, they could well preserve viral epitopes, at high radiation levels. With the same strategy they were also able to preserve immunogenicity of MRSA. These radiation levels were much higher than the levels otherwise required to achieve sterility. Given the fact that there are no well defined marketed vaccines for VEEV or MRSA, this really is a starting point. 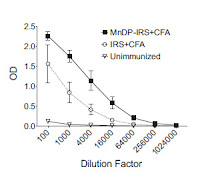 I would have stopped at this point excited. But the authors really went a step ahead. they evaluated, if the MRSA rescued antigens was of any good. For this, they used MRSA USA300 that had been exposed to 25 kGy with or without protecting agent. After radiation they removed the Mn-DP-Pi and resuspended in Complete Freund's adjuvant. (See Fig 6 on left). The Fig 6 contrasts Anti-S. aureus IgG titers in serum from mice immunized in complete Freund’s adjuvant (CFA) with MRSA USA300 irradiated in the absence (IRS) or presence (MnDP-IRS) of Mn-DP-Pi.


They subsequently also used a mouse model to evaluate the ability of MnDP-IRS immunization to elicit protective immunity. Of note, Mn-DP-Pi in itself was not shown to have any antibody eliciting capacity. And with some immunologic studies they were able to conclude MnDP-IRS immunization elicits antibody- and Th17 cell-mediated immunity.

In short, the study shows that a decapetide in combination with Mn2+ avoids some serious damage to the important antigenic epitopes. This can be of help in creating a vaccine quickly, by strongly radiating a pathogen and administering the whole set. Looks attractive. I want to leave a final figure of this post that sum up the facts. 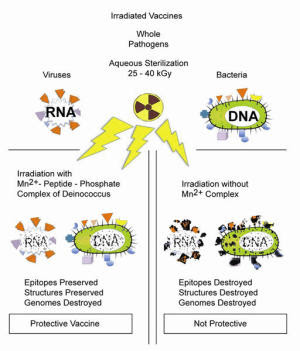 Fig 7: Contrast between damages with or without Mn-DP-Pi (Source)